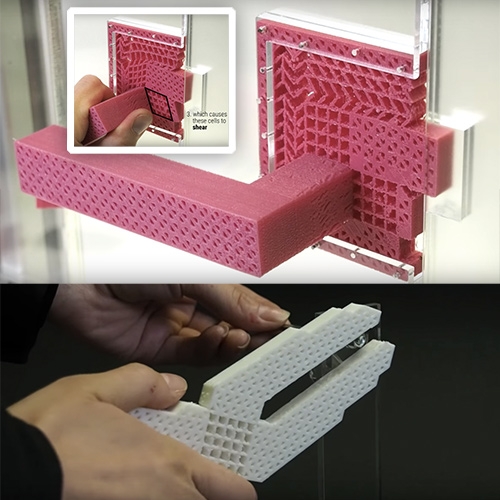 3D Printed Metamaterial Mechanisms - "We don't consider metamaterials as materials, but as machines. They require no assembly, as they consist of a single part." From the Hasso Plattner Institute HCI Lab.

Find out more about Metamaterial Mechanisms.

// Abstract
Recently, researchers started to engineer not only the outer shape of objects, but also their internal microstructure. Such objects, typically based on 3D cell grids, are also known as metamaterials. Metamaterials have been used, for example, to create materials with soft and hard regions.

In order to allow users to create metamaterial mechanisms efficiently we implemented a specialized 3D editor. It allows users to place different types of cells, including the shear cell, thereby allowing users to add mechanical functionality to their objects. To help users verify their designs during editing, our editor allows users to apply forces and simulates how the object deforms in response.