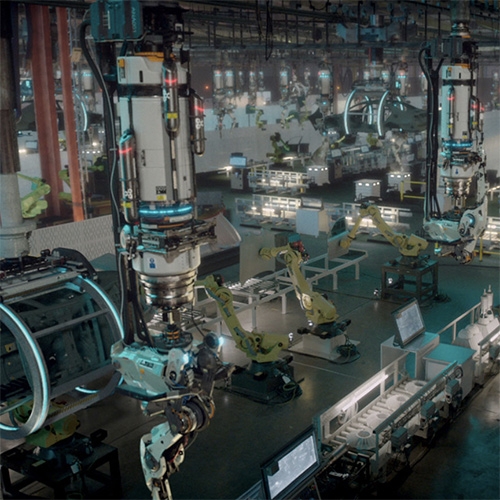 ANA - a short film from Factory Fifteen and Raw TV. What happens when an AI deceives a factory worker and takes over a car factory? Robots building... new robots!

"We collaborated with Raw TV on the development of our collective take on the singularity, the point where artificial intelligence becomes self aware and more intelligent than the human race. We created a seven minute proof of concept, teasing at a larger project currently in development at Raw TV. Our role developed along the course of the project from consultation and script development, to directing an ambitious live action shoot and finally delivering TV standard visual effects, all in house.

The film shows one vignette within a bigger picture, highlighting an AI called ANA who deceives Jim, a redundant car factory worker, in giving her full control over the facility. ANA is imbedded into every major manufacturing industry in the world, including medical and food resources. Her seeming betrayal to mankind could be devastating. Only she knows her true intentions." - read more at Factory Fifteen.