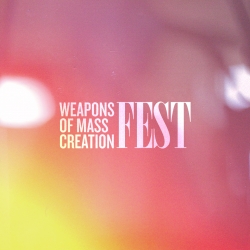 On June 11-12 we had the 2nd ever Weapons of Mass Creation Fest. An estimated 800+ people attended. The event, centered around the design, music, and ideas featured local and natinal bands, speakers, and designers across 3 venues over the weekend.

WMC Fest is put on by Go Media, a creative agency based in Cleveland, OH.

For more info on the festival here